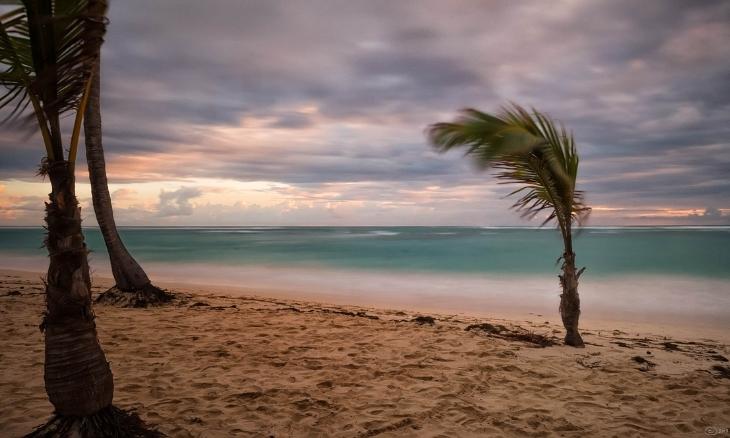 We appreciate a nice breeze as much as the next guy, but as a manufacturer of pop-up canopy tents, we have a love-hate relationship with the wind. In terms of hate? Scenes like this. It keeps us up at night.

And in terms of love? We LOVE the challenge of engineering a portable structure, like our MONARCHTENT, that laughs at the wind in its face. Those bad boys don’t come with a certified wind rating for nothing.

Every region of the U.S. deals with some form of wind, but some parts of the country are obviously worse than others. Let’s take a look at the windiest cities in the U.S. and then we’ll explain how TentCraft pop-up tents tackle tough winds when properly ballasted.

The Windiest Cities in the US

Spoiler alert: Chicago didn’t make the list. Using data from the National Oceanic and Atmospheric Administration (NOAA) and other online resources, we’ve compiled a list of the windiest cities in the U.S., in addition to a separate list highlighting the windiest large major cities in the country.


Located close to the Colorado border, winds off the Rocky Mountains sink down and carry across the eastern part of the state and into Kansas.

Jet streams are a big contributor to the heavy winds across Minnesota, including in Rochester.

The Rocky Mountains are a big contributor to the winds around the country. The plains of Wyoming add to its overall windiness.

Formerly known as Barrow, Utqiagvik goes through a 66-day period of darkness each year where the sun doesn’t rise.

The Texas Panhandle experiences brutal winds as a result of the westerly winds that swirl across the Rocky Mountains. As a result, persistent low pressure creates strong average wind speeds from the southwest and west.

Tradewinds consistently blow anywhere from 10 mph to 20 mph. The palm trees do a great job at making it look way windier than it is at times. Locals appreciate these winds, as they can cool you down during the hot Hawaii summers.

Why is Kansas so windy? Blame the Rocky Mountains. As the jet stream carries air over the Rockies, it sinks once it reaches the eastern side of Colorado, eventually making its way into Kansas.

Same story as Kahului. Winds can be powerful, but enjoyable on those extra-hot days.

As the largest of the Pribilof Islands, St. Paul Island is heavily influenced by the cold waters of the Bering Sea. The island is technically classified as “polar” because it’s so cold in the summer due to the high winds.

Cold Bay is the perfect combination of precipitation, low temperatures, and high altitudes. The wind loves all three of those things.

The Windiest Major Cities in the US

Here’s a list where Chicago, aka “The Windy City,” appears. These are the windiest major cities in the country and their average annual wind speed: 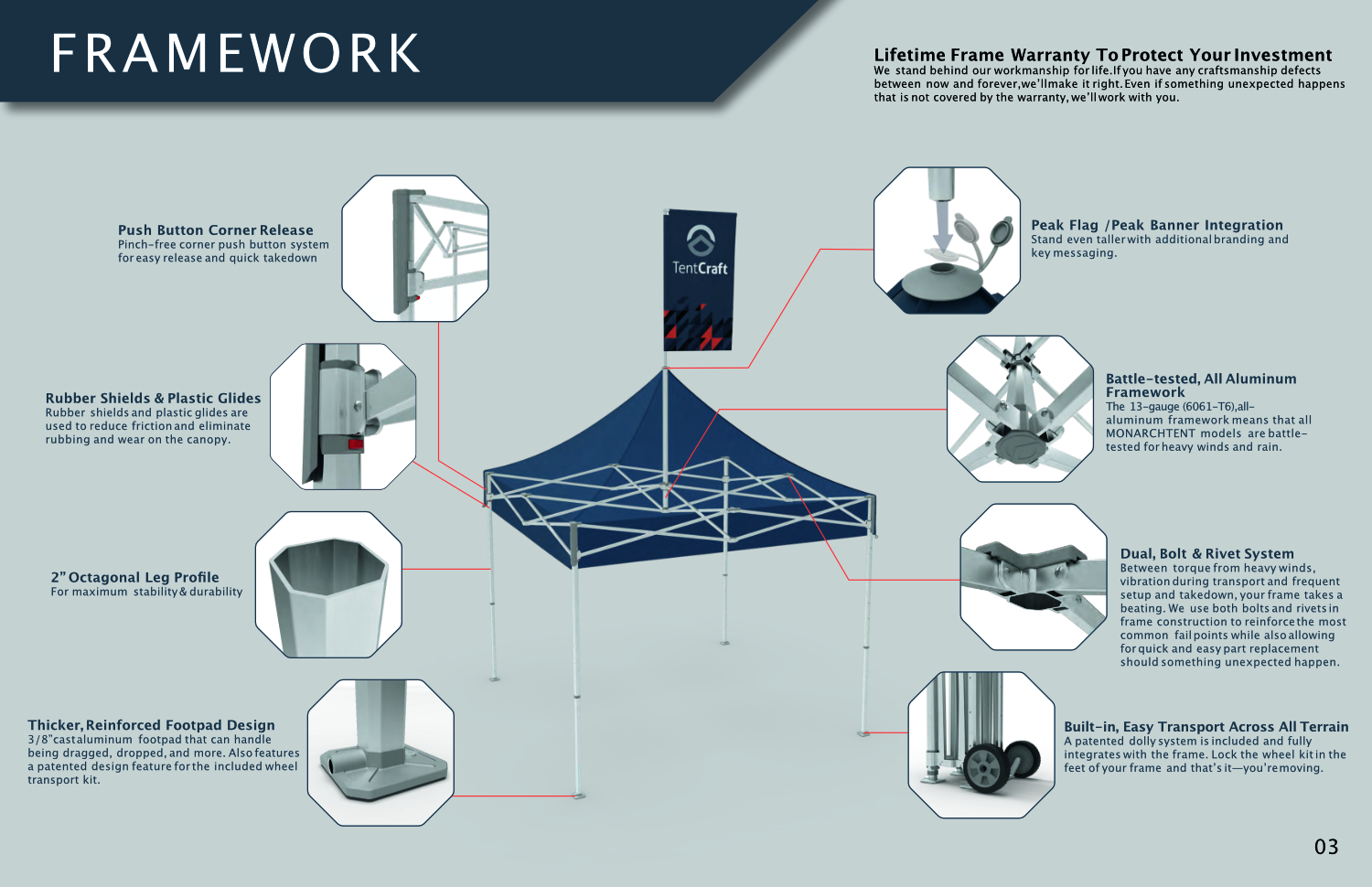 As the manufacturer, we understand the anatomy of heavy-duty pop-up tents and what’s needed to make sure your canopy survives potentially dangerous wind gusts.

The frame of our heavy-duty pop-up tent, MONARCHTENT, is made using anodized aluminum, which is a third the weight of steel and nearly as strong as diamond. The aluminum tent frame should be at least 2mm thick (12 gauge aluminum). Anything less is more for recreational use (think backyard barbecues and campsite pavilions).

The design of the legs of your pop-up tent is important too. MONARCHTENT uses an octagonal leg design that grips the ground better and adds more surface area for better stability. Our footpads carry the weight of the frame and are about a quarter-of-an-inch thick, for even more stability.

What’s the Wind Rating for a TentCraft Pop-Up Tent?

A TentCraft MONARCHTENT is wind rated to withstand 35 mph wind gusts when properly anchored. That’s a key differentiator between TentCraft pop-up tents and other brands on the markets. 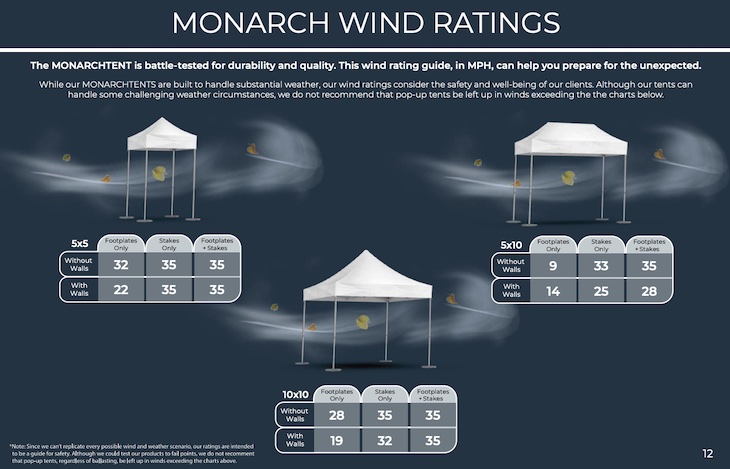 As you can see, TentCraft wind ratings can easily handle the average wind speed in all major cities — and even those outlier towns in Alaska and Hawaii — that are mentioned above.

As a side note, we would never endorse using one of our pop-up tents in 70 mph winds, let alone 50 mph winds! A Category 1 hurricane features wind gusts starting at 74 mph. If you’re flirting with those speeds, it’s probably best to pack up your pop-up tent to use for another day, no matter how well you plan to anchor it. It’s simply not safe.

You can learn more about our wind ratings, here. 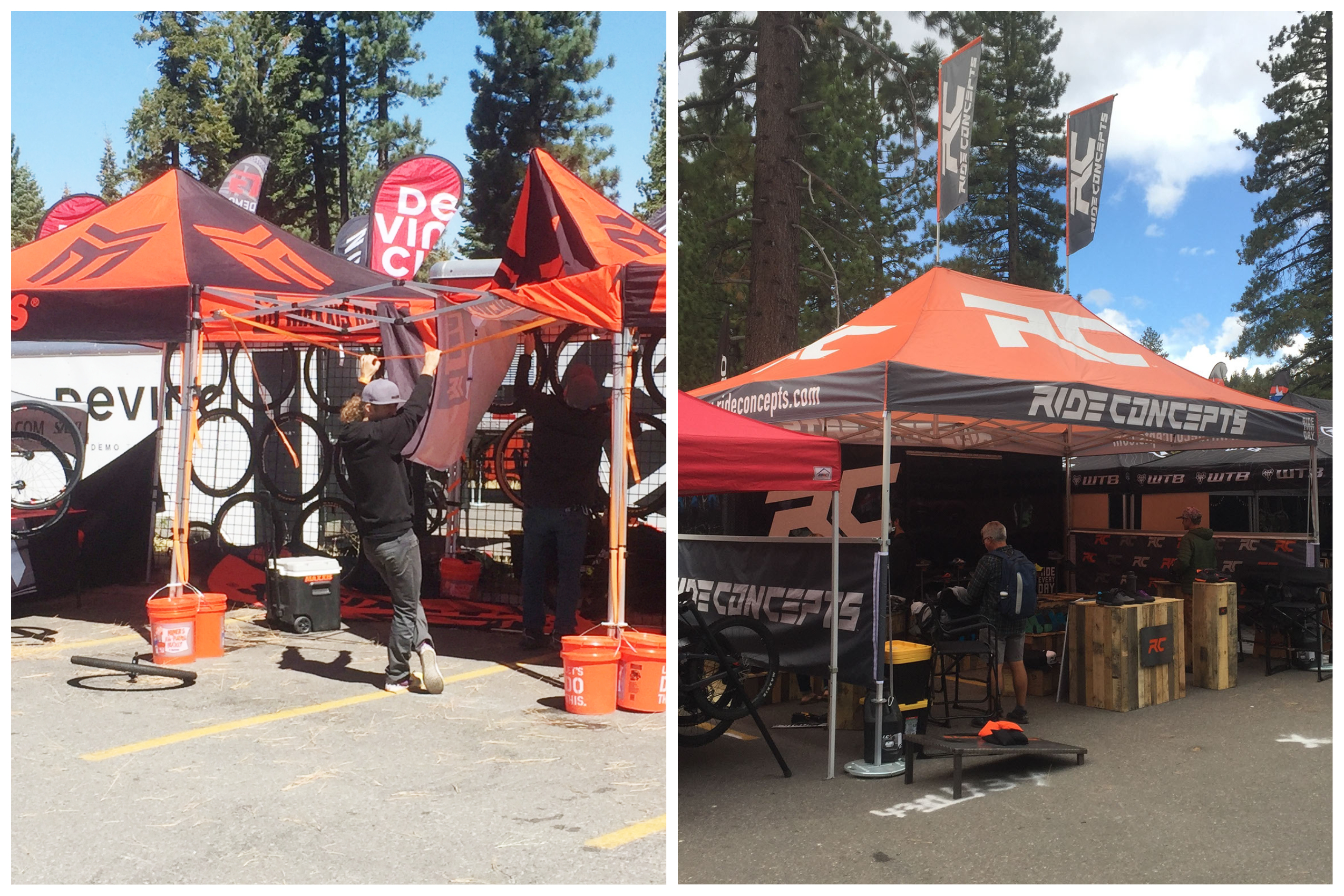 You tell us. The photo above shows two tents at a past Interbike cycling show. The wind was pretty strong that day and a handful of tents didn't make it, including the tent shown in the photo on the left. The photo on the right, a 13'x20' custom-lifted MONARCHTENT, handled the wind like a champ.

Our customers always tell us how much they appreciate the toughness of our products, as well. Here's a testimonial from Tamarack Farms Winery:

We love TentCraft! We've had other pop-up tents before and they were all OK until windy weather hits and then they get wrecked. Tentcraft tents are well made and sturdy to withstand the strongest winds. Tentcraft gets our highest recommendation!

So, can TentCraft pop-up tents handle high winds? You bet they can. They’re pretty great in the rain, too. But make sure to be smart about using your pop-up tent in bad weather. If there are 40 mph to 50 mph gusts, you need to ask yourself if you really even need to be outside. We’re guessing the answer is no.

Ready to learn more? Reach out to TentCraft today to get started on your new heavy-duty pop-up tent.