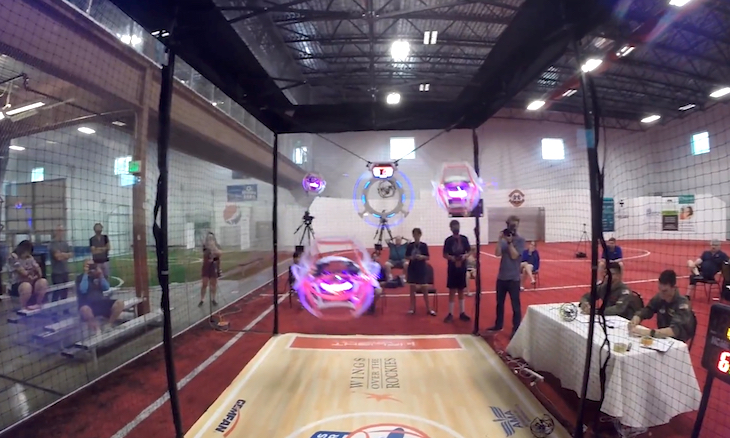 TentCraft is excited to announce that it has been named the official arena provider of U.S. Drone Soccer, an educational e-sport designed to make aerospace careers accessible for all students. The sport made its official U.S. debut Wednesday, Jan. 19., in Colorado Springs, Colorado.

Drone Soccer is played with flying quadcopter drones in protective cages that are designed for collisions. Five-player teams pilot the drones inside a netted arena manufactured by TentCraft, where they work to block the opposing team from scoring a goal. Matches are played in a best of three sets.

The e-sport focuses on education first. Students who compete during the academic year must first learn to build, program, and repair their drones as a team.

“The joy of flight is real. When a student flies, but then crashes and makes their first repairs — they’ve become an engineer for life,” said David Roberts, president of U.S. Drone Soccer, who previously took the U.S. Drone Racing Team to two FAI World Championships.

Following a year of testing with students and teachers, U.S. Drone Soccer officials developed the Saker DS200 “Bantam” Drone Soccer Ball, which is affordable and can withstand the wear and tear of the e-sport.

U.S. Drone Soccer is using TentCraft’s professional, custom drone netting enclosure as its official arena for the e-sport. Starting with the company’s proven, heavy-duty MONARCHTENT frame, TentCraft engineers increased the head clearance to 11 feet, creating the perfect environment for drone soccer. To make the sport more affordable and accessible to schools across the country, TentCraft has also configured the company’s medium-duty mightyTENT frame with additional head clearance, making it an optimal practice arena at a budget price.

“We’re always impressed with the applications our customers dream up using our custom tents and structures, and that’s especially true with U.S. Drone Soccer,” said Matt Bulloch, president and CEO of TentCraft. “We think this exciting new e-sport is going to have a big impact in schools across the country and we’re excited to play a small role in making that a reality.”

There are currently Drone Soccer teams in Colorado, Ohio, and New York. The first national tournament is being held in Denver on April 30, 2022.

All TentCraft tents and structures are manufactured, handcrafted, and customized in the company's headquarters and production facility in Traverse City, Michigan.